This page may contain compensated links. For more information read our disclaimer here.

If you want to explore more of Malaysia, head over to the charming town of Ipoh. Found in between Kuala Lumpur and Penang, this inland city continues to attract tourists because of its unique cuisine, scenic natural attractions, ancient temples, and colonial structures from the 19th century.

Equally as stunning, Taiping is one of Malaysia’s most underrated gems, featuring the country’s rich history, delectable food, and scenic views of nature. Most of its attractions are even walking distance to one another!

I also describe the reverse journey from Taiping to Ipoh. The Ipoh to Taiping distance is 68 km. with an approximate driving time of 1 hour and 18 minutes.

BEST OPTION: How To Go From Ipoh To Taiping

Now, there are several ways you can travel to and from these destinations. The quickest way you can get to your destination is to travel by train.

Meanwhile, if you’re a budget traveller, the cheapest way to get to your destination is via a direct bus from Taiping to Ipoh.

Option 1: Bus From Ipoh To Taiping 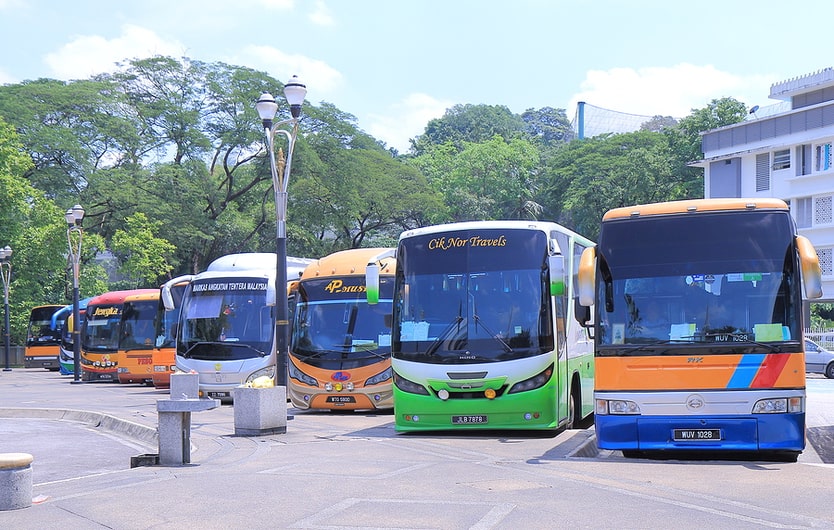 If you plan to take the bus from Ipoh to Taiping, several bus lines ply along this route at the Medan Kidd Bus Station which is located at the edge of Ipoh’s Old Town.

Note that the terminal isn’t far from the railway station, just a quick 5 to 10 minutes walk on the south side of Ipoh Railway Station. These buses run often, almost on an hourly basis, depending on the concentration of passengers.

The journey takes approximately 2.5 hours, depending on the traffic, and costs about RM20. If you want to get to your destination quicker,  you can take the express bus as well.

Alternatively, you can also catch a bus from a more modern bus terminal, found in Amanjaya ‒ the Aman Jaya Bus Terminal. It is found north of the city and is about 10 km from the Ipoh Old Town.

Note that it’s quite far from the city centre so you might have to take a local bus at Median Kidd or take a taxi or Grab for about 10RM.

Taking the bus is usually the cheapest option if you want to get from Ipoh to Taiping, and ideal if you’re a budget-traveller. But if you want to get to your destination a lot faster, I recommend that you take other transportation options such as taking the train, or a private vehicle. A faster way to get to your destination is to take the ETS train. I recommend that you consider this option if you’re looking for a quick, and convenient way to get from Ipoh to Taiping.

Approximate travel time is about 50 minutes and will cost about RM20 to R24.

These trains are limited, so, if you’re planning to take the ETS Ipoh to Taiping check the departure time that’s good for you.

Another reason why you might consider taking the Ipoh Taiping express over a bus is that Ipoh’s train station is only a short walk from Ipoh’s Old Town.

Option 3: Ipoh To Taiping By Car Another alternative if you don’t want to take public transportation is to travel from Ipoh to Taiping by car. Total time is approximately an hour with a distance of 68 km.

Although more costly, this option allows you to create a more flexible itinerary, with the opportunity to stop at notable attractions along the way (like Kuala Kangsar). However, I don’t recommend this if you’re a solo or budget-traveller.

Click here to read more about driving in Malaysia.

Option 4: Ipoh To Taiping By Taxi

The last and final option if you want to travel from Ipoh to Taiping is to take a taxi. This will usually cost around RM200. Travel time is approximately an hour.

Taking the taxi is a more convenient way to get to your destination, (and also more flexible) than most public transportations. However, it can be costly if you’re travelling on a budget. If you’re wondering how you can get from Ipoh to Taiping, all you need to do is to take the following options we’ve listed in reverse. You can either take the ETS Taiping to Ipoh train, ride the bus, travel by car or taxi.

If you’re taking the train (KTM Taiping to Ipoh), Taiping’s train station is also close to the town centre. ETS trains that run from Taiping to Ipoh usually take 50 minutes, and cost about RM24. I recommend that you book your train tickets in advance rather than just turning up in the station.

A cheaper alternative is to take the bus. Keep in mind that most buses don’t depart from Taiping town. So, you need to head to Kamunting (which is approximately 6 km away) or Simpang (about 7 km.) The bus ticket from Ipoh to get to these places will cost around 10 – 11 RM.

Similarly, you can also travel via private car or taxi.

In this post, I’ve covered the different transportation options that you can take if you’re planning to travel from Ipoh to Taiping, or vice versa.

If you want to arrive at your destination the quickest way possible, you can take the train. Meanwhile, if you want to cut costs (and have some extra time to spare), the cheapest way to get there is via bus.

Finally, if you want to arrive at your destination without the hassle, you can take a private vehicle or taxi.

No matter what you choose, I hope you found this guide to how to travel from Ipoh to Taiping useful. You can find our complete travel guide to Ipoh here and our guide to Taiping here as well as the best accommodation options in Taiping here.